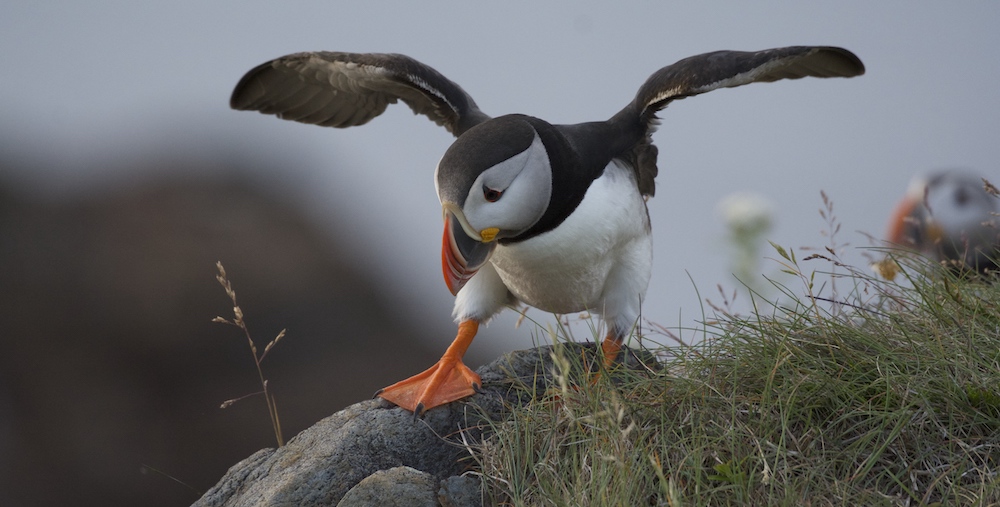 This past summer I made a short two-week trip back to Newfoundland, Canada, where I grew up. When planning the trip for me, my wife, and kid, I realized that there were a lot of tourist attractions there that I hadn't paid attention to before. Perhaps most notable (and also a pet interest now that I've taken up bird photography here in Japan) was the iconic provincial bird, the atlantic puffin.

I can never remember ever seeing one growing up, nor had I ever gone out of my way to seek them out. So for this trip, I decide to ask around and find out the best place to try to photograph one, or even a few. I knew I'd be visiting my brother's house in Witless Bay, which was coincidentally also home to an ecological reserve and North America's largest puffin colony. But when I asked a photographer friend [^alick] where the best puffin viewing spot might, he advised that Elliston (a tiny town on the Bonavista peninsula) was the better location. And it turns out he was right. 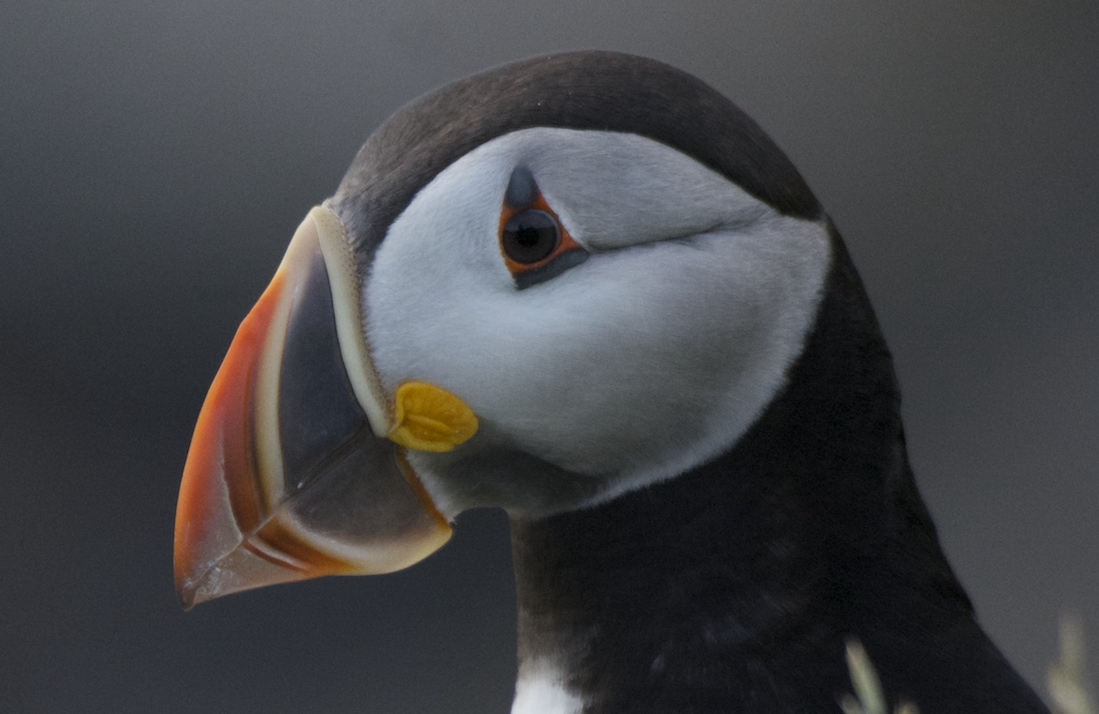 The Puffins of Elliston, Newfoundland

In what might be the most misguided tourism slogan even, the town of Elliston is dubbed "The Root Celler Capital of the World." I don't mean any disrespect, but let's face it: a root cellar is not going to win any tourism awards any time in this century. And to be fair, it's hard to market a literal hole in the ground. Elliston should be hailed as the puffin capital of Newfoundland, and maybe even the whole world because of just how close one can get to the birds there [^season].

[^season]: I should note that according to the Elliston website, the puffins are in the area only between May and September.

Elliston is a short 15 minute drive from Bonavista, the latter being maybe the best tourist destination in the province right now, making Elliston doubly worth the 3.5-hour drive if you're coming from St. John's. Once in Elliston, road signs direct you to the puffin viewing sight (Google Maps), a small island you can approach from the south via an adjacent point of land tht juts out into the ocean. From there you can sit back and look across the watery gap that protects puffin rock, watching them as they fly circles around it or hop about their burroughs. 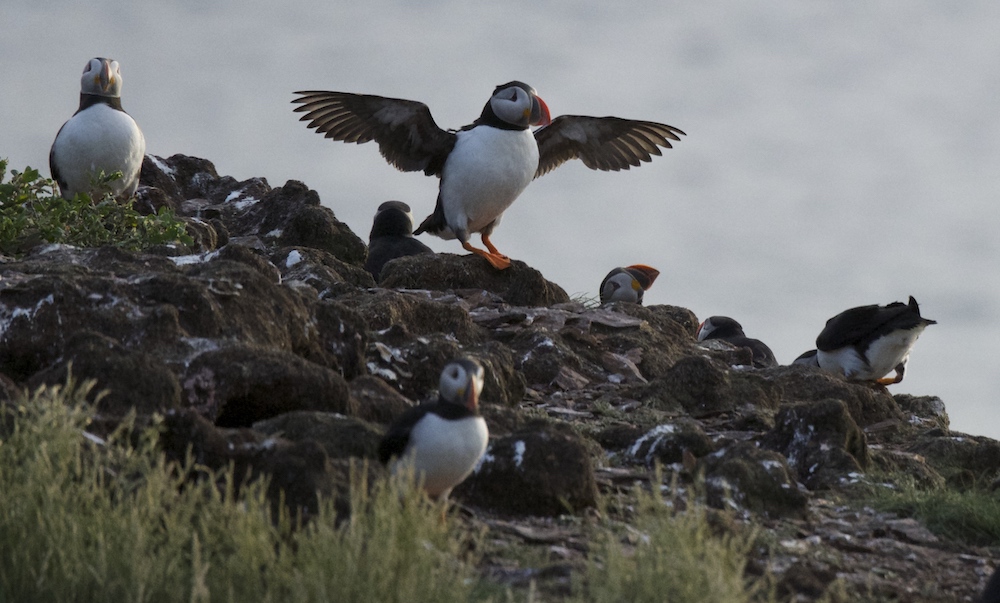 While you could satisfy yourself with the view from the point, one kindly photographer I met on the site advised me to keep clear from the right side of the point. Turns out, if that side of the point is empty of people, puffins will frequently perch there as you sit quietly just meters away on the left side. For anyone with a camera it's the perfect photo opp, as puffins stumble clumsily about the edge of the point. Here's a short iPhone video I shot sitting rather close to a few one morning:

While I've never visited any other puffin colony in the world (I hear they can be found in Iceland, Norway, Scotland, and Ireland [^starwars] too, among other places) but seeing puffins at such close range as you can in Elliston must surely be a rare experience. To get so close to puffins without any restrictive rules (save this self-policing of veering left) is really amazing. And what's more, the point faces north which means you have the benefit of enjoying a sunrise to the right in the morning and a sunset to the left in the evening. For photographers, that means a wide range of light to experiment with from morning to night.

[^starwars]: You may have seen puffins (in CG disguises) in the most recent Star Wars film, parts of which were shot on Skellig Michael.

Here are a few more of the snapshots I took of the puffins in Elliston: 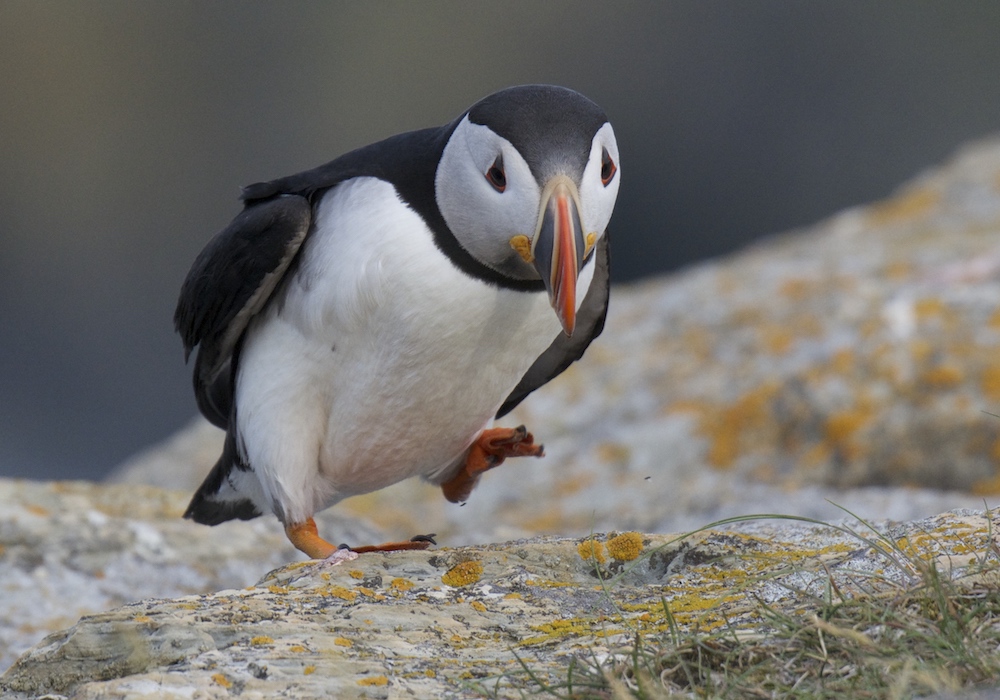 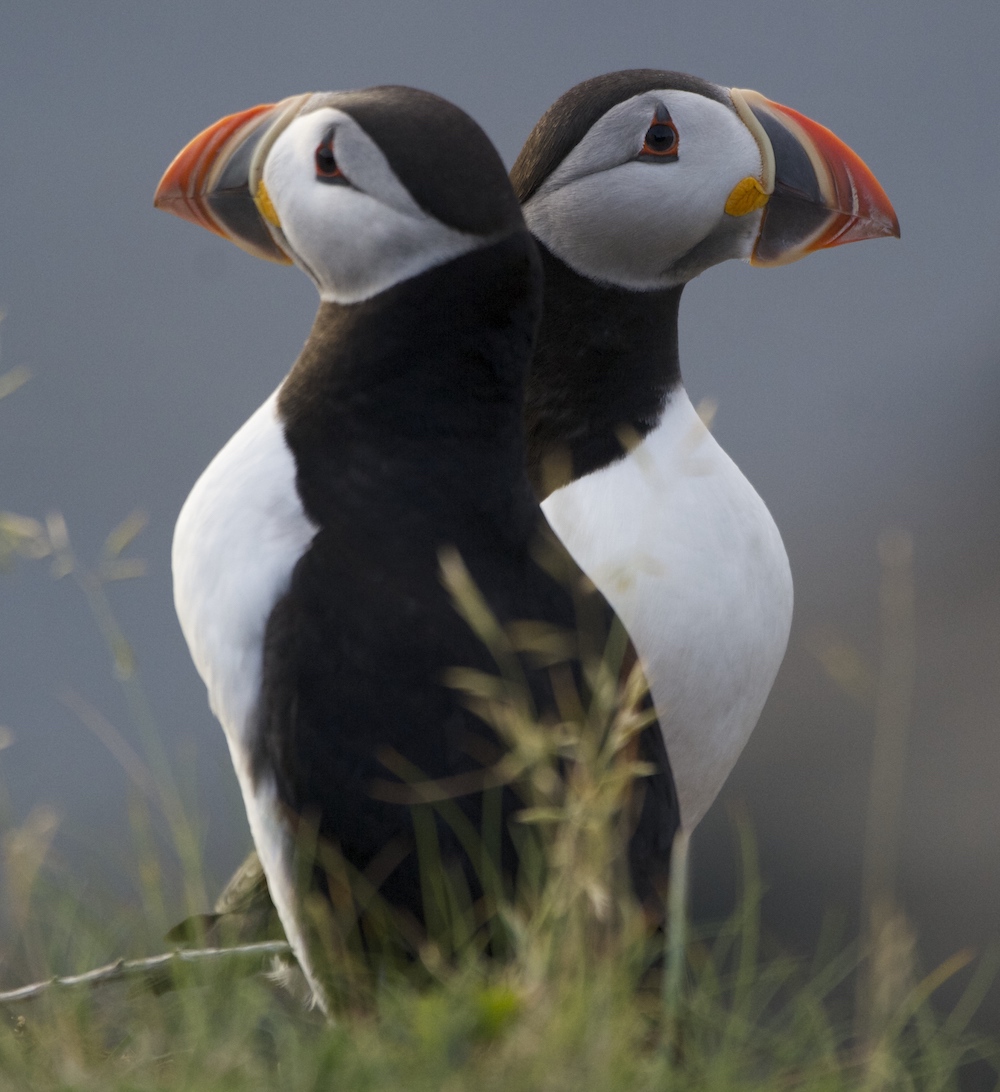 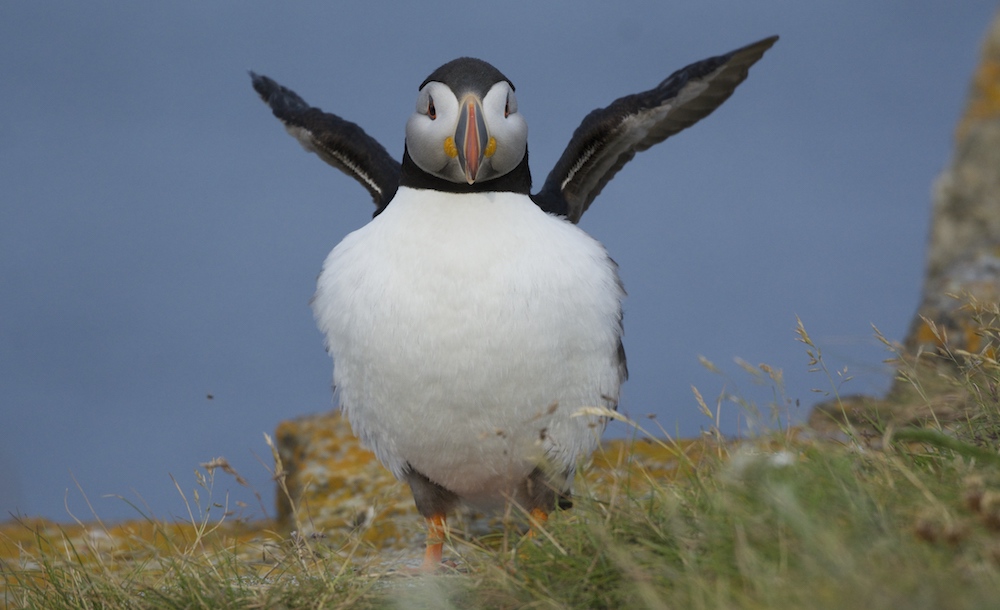 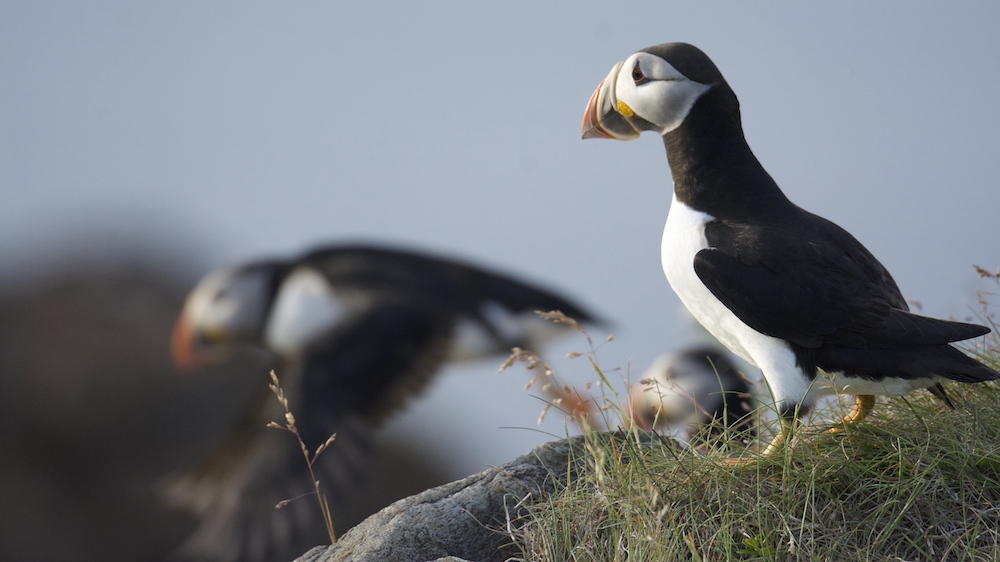 Puffins (plus Whales) in Witless Bay

While Elliston was maybe the highlight of our [^highlight] trip, we also made an effort to visit the Witless Bay colony. Unlike Elliston where the puffin viewing site can be accessed on foot, the Witless Bay site - aka Gull Island - is further offshore, typically accessed by boarding one of the local boat tours. We opted for Gatherall's Boat Tours, a company with a larger boat in the hopes that our kid wouldn't get seasick as she had last year when we visited Maui. But from a photographer's point of view, I understand that Captain Wayne's operates a smaller zodiac boat that can get you a little bit closer to the island. Gatherall's and the other tours with larger boats are required (by law, I think) to maintain a certain distance from the island in the interests of protecting the wildlife.

I was somewhat disappointed that the closest we could get to puffins was to shoot them when they landed in the water nearby, or if they flew by the boat [^emailed]. Thankfully this voyage had far more to offer than just puffiins, with spectacular whale viewing , as well as some other species of birds like murres, pictured below.

Overall, I think if you haven't seen many whales before, then a boat tour in Witless bay is definitely worth the trip. And check out the Irish Loop Cafe for breakfast if you can as well. But if you're looking around for puffins, and if you can swing the trip, Elliston is by far the better spot.

[^emailed]: Prior to our trip I had emailed the Witless Bay reserve about if a permit to photograph was doable. Their reply was too late to accomodate this trip, but they did point to a permit application (PDF), though didn't go into detail on further instructions.

[^alick]: Check out Alick Tsui Photography over on Facebook. He's a good dude, and he takes really good pictures.

[^highlight]: I say "our" trip, because I think my kid enjoyed the puffins a bunch. Neighboring Bonavista proved a wonderful spot too.