Rediscover Murakami on a tour of Tokyo

This article first appeared in Japan-i Magazine, which is no longer running. I'm posting it here on my blog for archival purposes. 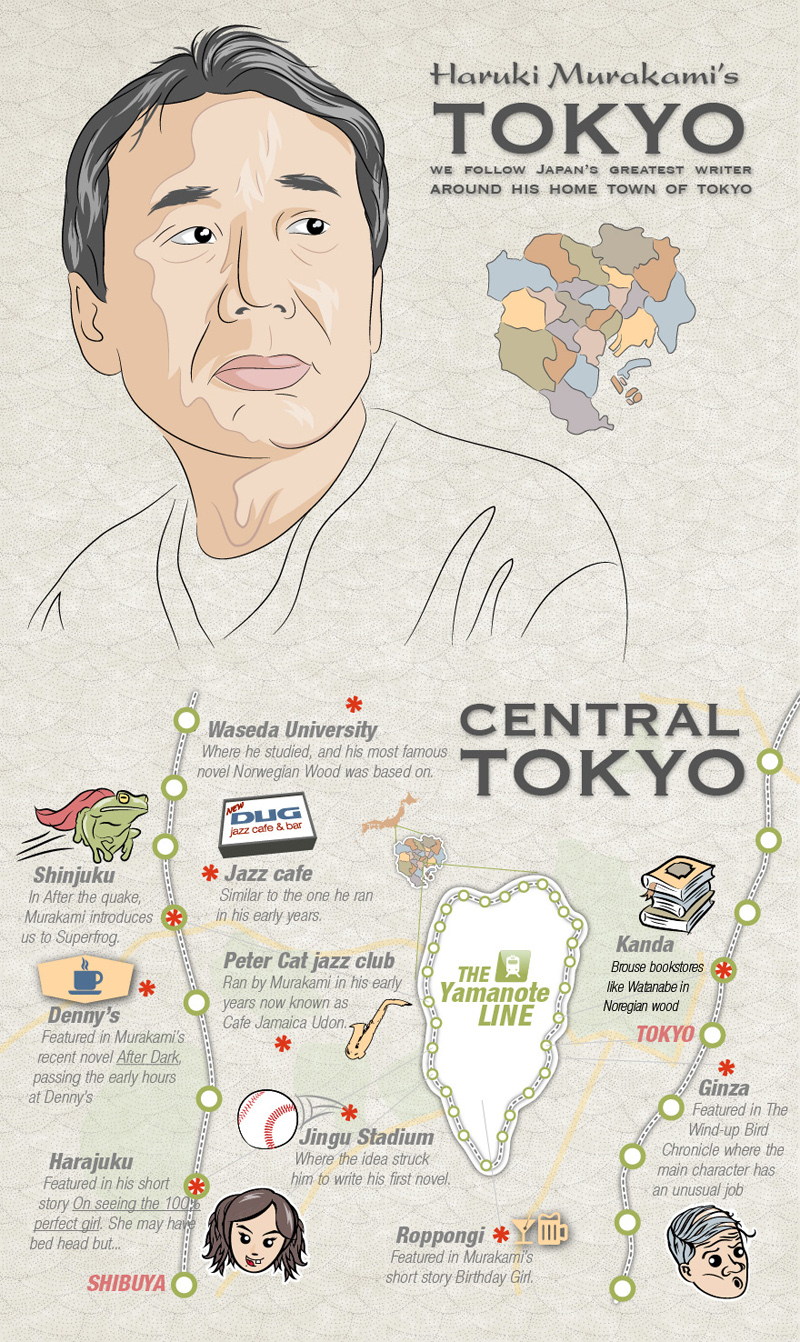 For fans of Japan’s most famous modern-day novelist, exploring the city with his life and literature in mind makes for a fascinating escape.

It has been four years since Haruki Murakami’s last novel "After Dark" was released in English. That’s a long time for dedicated fans who have already devoured his works and are waiting for something new. The reclusive nature of the author hasn’t given fans much else to consume. A few interviews here and there, but not much else. Even before the recent film adaptation of "Norwegian Wood," there has always been an impulse among some readers to attach visuals to Murakami’s words. Some hardcore fans have created videos on YouTube to accompany his stories. Similarly, the BBC filmed a documentary titled "Imagine," which seeks Murakami in locations around Tokyo and dramatizes some scenes from his fiction.

The beauty of Murakami’s writing is that the themes are accessible regardless of wherever the stories play out. Many of these stories could happen anywhere on the planet, and perhaps that’s why they’re so popular. But in the spirit of attaching real places to the author’s words, we thought it would be interesting to examine a few of the notable locations mentioned in Murakami’s novels and short stories, as well as places that hold a certain significance in the his life. While Murakami’s Tokyo is far more surreal than the real thing, it might be fun to keep some of these locations in mind the next time you find yourself wandering the city.

The Shinjuku underground: What lies beneath

At the very heart of Tokyo, Shinjuku is an obvious must-see for any visiting tourist. Busy nights illuminated with neon, lively with pleasure seekers — there’s much to see and do under the surface of Shinjuku and the Kabuki-cho district that a traveler might best avoid. In "after the quake" Murakami introduces us to Superfrog, a wonderfully serious character who warns that there are quite literally apocalyptic dangers lurking underneath Shinjuku, and he implores Mr. Katagiri to come assist him in an epic battle to save all of Tokyo. The next time you’re wandering in the vicinity of Shinjuku Station, be sure to give some thought to what might be there that you can’t see. Just as in "Superfrog Saves Tokyo" you may find that a mysterious and undiscovered world lies just beneath the surface.

Enjoy coffee and a book after dark

While many of us tend to panic as today turns into tomorrow and the ‘last train’ time approaches, you can always take a more relaxed approach and just stay out. Like Mari in Murakami’s recent novel "After Dark," passing the early hours at Denny’s with a good book and a coffee is not a bad way to spend the night. If you’re hungry, the chicken salad and nearly-burnt toast come highly recommended.

Murakami has attributed much of his literary inspiration to music, especially jazz. His prose is imbued with a rhythm that flows, and he often references songs and musicians. The writer once had his own jazz bar in Tokyo, as he explains in "What I Talk About When I Talk About Running:"

I’d been running a sort of jazz club near Sendagaya Station. Soon after college - actually I’d been so busy with side jobs I was still a few credits short of graduating, and was still officially a student - I opened a small club at the south entrance to Kokubunji Station.

Naturally fans will be inspired to seek it out themselves, although what you’ll find there now is Cafe Jamaica Udon in place of Murakami’s bar which was called Peter Cat. If you do stop in for a bite, you might let your imagination take you to a time when the air on that corner was filled with jazz, cocktails, and coffee.

If you prefer your music a little more tangible there are still a number of jazz bars around town, including DUG near Shinjuku which was featured in "Norwegian Wood."

Seek your 100% perfect girl in Harajuku

Famous for it’s unusual street fashion, Harajuku is a favorite spot for people-watching. In his short story "On Seeing the 100% Perfect Woman One Beautiful April Morning," Murakami tells the story of a man who briefly encounters a girl in a Harajuku back alley and instantly recognizes her his perfect match:

Tell you the truth, she’s not that good-looking. She doesn’t stand out in any way. Her clothes are nothing special. The back of her hair is still bent out of shape from sleep. She isn’t young, either - must be near thirty, not even close to a “girl,” properly speaking. But still, I know from fifty yards away: She’s the 100% perfect girl for me.

Of course even if stalking is not your thing (I kid, I kid...) Harajuku district has a lot to offer, with great shopping, a gorgeous green park, and Meiji Shrine nearby. But if you happen to find yourself navigating the side streets of Harajuku on a fine spring morning, be sure to keep an eye out for your own Mr. or Miss Right. If you missed them it’d certainly be a sad story, don’t you think?

After Harajuku you might consider swinging by Jingu Stadium, the location where Murakami, while watching a baseball game, had his now famous realization that he could and should write a novel:

The crack of bat meeting ball right on the sweet spot echoed through the stadium. Hilton easily rounded first and pulled up to second. And it was at that exact moment that a thought struck me: You know what? I could try writing a novel.

And thankfully Murakami did try his hand at a novel, and eventually went on to give us many more, plus a ton of short stories as well. While we can’t guarantee that catching a baseball game at Jingu Stadium will induce you to write best-selling books, it would certainly be fun to spend an afternoon in the stadium that sparked Murakami’s writing career.

With lively nightlife, a variety of restaurants, and a heavy expat presence, Roppongi is a great spot for a night out. In Murakami’s short story "Birthday Girl," which you can find in the collection "Blind Willow Sleeping Woman," a former waitress reflects on the night of her twentieth birthday. On that night she found herself working in an Italian restaurant with a view of Tokyo Tower, and she recalls how she met the mysterious owner who granted her a birthday wish.

You might not be granted any wishes, but an evening spent at the right restaurant in Roppongi could have some magical moments in store. Especially if it’s your birthday.

This one is a little quirky, but stay with us. In "The Wind-up Bird Chronicle," Toru Okada goes along with May Kasahara to help her with an unusual job in Ginza. May, who does some work for a wig maker, is tasked with counting how many bald heads pass her by. Toru helps her out by keeping a paper tally while she calls out A, B, or C depending on which classification of bald has just gone by.

While we don’t recommend this as an especially fun recreational activity in Tokyo, it might be an interesting way to pass the time as you wait for your next train.

Not far from Shinjuku lies Waseda University, the school where Murakami himself studied, which he would later use as a model for the university in "Norwegian Wood." Explore the campus if you’re in the area, or if you have an afternoon to spare, you might follow Naoko as she walks aimlessly through the surrounding neighborhoods, just as Watanabe did:

She turned right at Iidabashi, came out at the moat, crossed the intersection at Jinbocho, climbed the hill at Ochanomizu and came out at Hongo. From there she followed the tram tracks to Komagome.

Watanabe mentions that he visits the bookstores in Kanda. Bookworms would do well to drop in on this area, and perhaps pick up a copy of "Norwegian Wood" just to be a little "meta."

Of course "Norwegian Wood" was set in the sixties, and Tokyo has certainly changed since then. But if you’d like to explore the many other locations in the book, there’s a great list assembled over on Google Maps (in Japanese).

Murakami’s most recent work "1Q84," already selling well in Japanese, will be published as a single volume in English this fall. And while I have yet to read it, publishing house Shinchosha has an interesting webpage mapping locations from the book. The page is in Japanese, but it does offer a number of additional locations around town that you might consider visiting once you’ve read the book.

A film adaptation of Haruki Murakami’s "Norwegian Wood" finally made it to the big screen in December in Japan, 23 years after the book was initially released. While there have been some movie interpretations of his work in the past, the author has always been somewhat reluctant to allow a film version of "Norwegian Wood" to be made. This adaptation only came about after four years of negotiations between the author, director and producer.

While Murakami was open to the idea of the film being based outside of Japan, French-Vietnamese director Tran Anh Hung preferred to film it in Japan using Japanese actors.

The rights to use The Beatles version of the song "Norwegian Wood" took some time to secure as well, as Apple Records owns the copyright. But the director insisted that the Beatles version be used. The song appears in numerous scenes during the movie.

The film stars Kenichi Matsuyama as Toru Watanabe and Rinko Kikuchi as the enchanting Naoko. Kikuchi was a 2006 Academy Award nominee for Best Supporting Actress in "Babel" in 2006.

Surprisingly "Norwegian Wood" was not the only Murakami work to emerge on film in 2010. Kirsten Dunst starred in a low-profile ten-minute short entitled "The Second Bakery Attack," based on Murakami’s story of the same name.

Nothing Lost in Translation

Even though Haruki Murakami’s writing is mostly set in Japan, the themes are universal enough that the scenes could be set almost anywhere. His works contain vivid imagery and metaphors, unforgettable characters like talking cats, and Colonel Sanders - striking ideas that retain their impact when translated.

Murakami has been adapted into English by a number of translators who often work directly with the author. Jay Rubin recently spoke of his experience translating Murakami during a symposium at UC Berkeley. He noted that Murakami himself has been the translator of many well known English works, which helps when porting his works into another language.

In addition to winning acclaim among English readers and critics, Murakami is wildly popular in neighboring China as well. Even as political tensions between China and Japan run high, Haruki Murakami’s writing is perhaps now more popular than ever in the Middle Kingdom. Fans too impatient to wait for authorized Chinese versions to hit shelves crowdsourced the translations themselves.

Just last year opportunistic Chinese publishers tried to capitalize on demand for Murakami’s latest work "1Q84" by selling the book without permission via Apple’s App Store. When the book finally did hit the shelves in China this past May, it reportedly sold 1.2 million copies in its first month, showing that Murakami’s universal appeal can overcome old prejudices, and bridge cultural gaps like few others.